Action Will Be Taken


Action Will Be Taken Radio

Action Will Be Taken formed in 1995 as a result of keen observation. It was an observation of a hardcore punk scene that was in a way, a contradiction. They were noticing sub-divisions and cliques. It was drunk punks, straight edge, skin heads, politics, anti-politics, art, artists… there was even people with long hair performing at shows and the audience yelling “hippie, get a haircut”!

The whole scene was started on the basis of not feeling like an outcast and having a sense of family. It started to become who you know, how high your Mohawk is, etc. There seemed to almost be a dress code. There were scenesters coming to promote friend’s bands and leave after they were done. They were shunning anything new and not supporting all bands. Although the intention of music scenes are created to unify and the common denominator is music, things were slipping.

Action Will Be Taken were a tornado of truth. Who cares about anything except the truth and in finding the truth, it calls for asking questions. They felt anger and frustration. Thousands of years of history and religious beliefs and the zombies all that it was producing even fell within the sanctity of the hardcore/punk scene on all different levels, obviously. The band didn’t care about photos or press. Just write songs, play shows, release a 7inch and inject a new sense of self into the scene. They played with the likes of Wrecking Crew and Madball. They were always asked “where the fuck did you guys come from”? They were a creation of a product of our environment and old school integrity.

They were completely influenced by the high energy driven music of Youth of Today, Minor Threat, Iron Maiden, Agnostic Front, G.B.H., Life’s Blood, Sabbat, Judge, Jesus Christ Superstar, Sick of it All, D.R.I., Wishful Thinking, Suicidal Tendencies and No Mercy. The group did exactly what they stood for and all within one year, true to form, they were gone. Just as quickly as hitting the scene, they disappeared. They recorded an E.P. and things collided with the intensity of creating a solar system, the band never released it… until now. 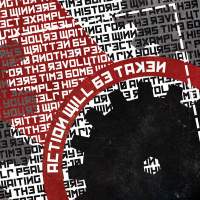