Two composers from different backgrounds that share similar music sensibilities. Headsnack, hiphop/electronic music composer and producer has been calling on classically trained guitarist and composer, Primo Sol since 2015. You can hear Primo play on Headsnack’s 2018 solo album, “Secret Handshake”. Primo’s standout tracks from that release include the hard hitting singles “Alternative Facts” and “Back from Intermission”, as well as the futuristic funk of “I’m in Love with a Bot”.

The thing that has made them such a tight duo is their mutual love for audio effects. Both are fanboys of and share similar plug-ins from the likes of Eventide, Universal Audio, iZotope, Sound Toys, Native Instruments and Arturia.

This bonding over the manipulation of audio, and learning the alchemy of engineering a mix, brought these two to their first official release. “Effected” is a collection of 10 songs written in collaboration from separate locations. It’s a fanboy/concept album in which each song features the same effect on almost every track. For this release, they chose Eventide’s H9 Plug-in Series for their creativity and playability. Lots of automation and real-time tweaking is abound thanks to the H9 Plug-In Series’ innovative Ribbon and HotSwitch controls.

Headsnack and Primo Sol cover lots of different styles. You can hear the influence of hiphop, classic rock, blues, funk, classical; electronica, and middle eastern music in their work.  Regardless of genre, they somehow make it all sound cohesive as a style all their own.

Pop a cassette of their music in your car because it’s great music to drive to. 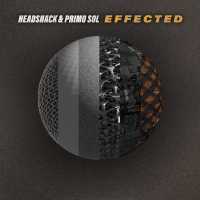