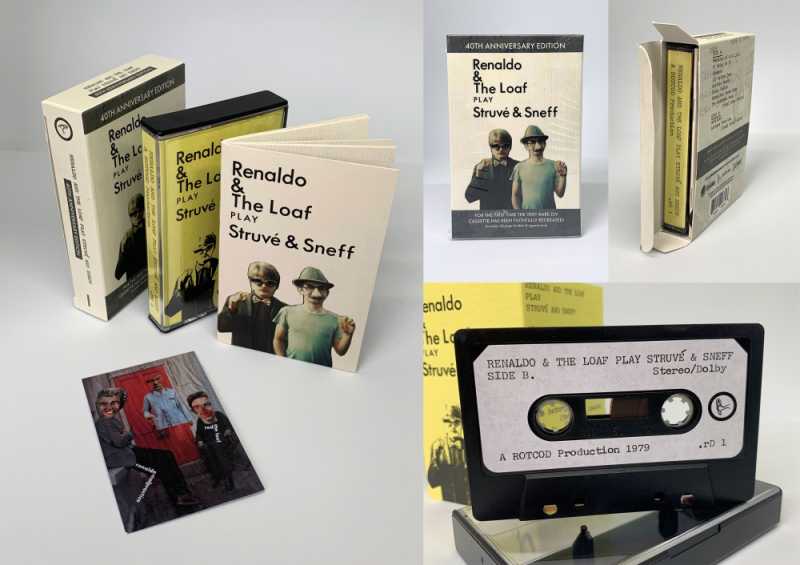 Today we’re thrilled to finally announce a secret project that we’ve been working on for much of the year. Our second blocGLOBAL retail release!

Celebrating the 40th Anniversary of their D.I.Y. cassette debut, Renaldo & The Loaf revisit Play Struvé & Sneff with a very special deluxe run of only 200 copies!

For the first time since 1979 this very rare release is faithfully recreated, right down to the photocopied images and typewritten cassette labels! In addition, the cassette is included within a beautiful custom retail box along side a signed/numbered “RATL & A Stranger” promo card and a 36 page booklet telling the complete story of how Struvé & Sneff came about way back when!

It's available in select US and UK retail outlets. Keep an eye on renaldoloaf.com, blocSonic.com and social media for availability information.

So just who are Renaldo & The Loaf?

Two British guys, Brian Poole and David Janssen, who met in 1970 and self-taught themselves to play their instruments in their own very individual way. Always recording their own material in a bedroom studio, over time they developed an increasingly strange yet very British repertoire of oddly accessible songs. Spurred on by the D.I.Y. ethic of the late 70s, in 1979, they compiled their first album as Renaldo & The Loaf, a hand-made cassette that was sold locally and thru mail order. Only about 250 copies were ever made.

In late 1979 that cassette was brought to the attention of The Residents and it directly lead to the band signing to Ralph Records in San Francisco. They went on to release 5 albums on the label including a unique collaboration project with The Residents themselves.

Original copies of the cassette album are now a prized collector’s item and with its 40th anniversary in September 2019, a special re-issue will be an exciting prospect for their loyal fanbase.

After a long break, Renaldo and The Loaf re-formed and are still recording and releasing highly individual music.

Check out the official release page for where this collector’s item can be purchased.